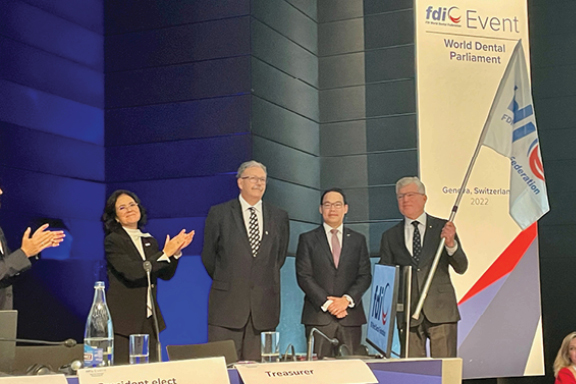 With the FDI World Dental Congress 2023 (FDI WDC 2023) now well less than a year away (to held 24th to 27th September 2023), it was fitting recently that key groups involved in the event gathered at the International Conference Centre (ICC) in Sydney to preview next year’s exciting global dental event.

Among those who attended presentations, either in person or via video link, in the ICC venue which overlooks Darling Harbour where the FDI WDC 20233 will be staged, were host organisation, the Australian Dental Association, the FDI World Dental Federation, FDI Priority Partners such as Henry Schein, Oral-B and TePe, the National Organising Committee overseeing planning of FDI WDC 2023, Business Events Sydney, the ICC team and the ADA staff charged with making the event as successful as possible.

By any measure, the 110th edition of the annual Congress will be impressive.

The four-day scientific programme, featuring leading dental experts from Australia and around the world, will be accompanied by a 25,000 square metre exhibition and over 200 hours of professional learning opportunities.

Plus with one of the most beautiful cities in the world on the doorstep – the ICC representatives pointed out that Sydney has the rare distinction of having its venue right in the heart of the city – there will be plenty of chances to network with friends and colleagues in all kinds of convivial settings.

With attendees expected in their multiple thousands from more than 130 countries across the world, and attendant events like the FDI Parliament, where the business of world dental governance takes place, and the FDI Young Dentists Forum, FDI WDC 2023 is set to be the largest dental event ever to be held in Australia.